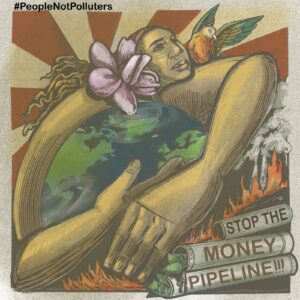 Stop the Money Pipeline is a coalition of over 100 organizations working to stop the flow of money from Wall Street to the fossil fuel industry. We have 3 main targets:

JPMorgan Chase
Since the Paris Agreement was signed in 2015, JPMorgan Chase has loaned over $269 billion to the fossil fuel industry — a whopping 36% more than any other bank. For the last three years, we have been working with groups across the country to demand that Chase stops doing business with the fossil fuel industry. You can read this blog to learn more about the campaign.

In March 2020, Chase finally passed a policy — unfortunately it only impacts a tiny fraction of its overall fossil fuel funding and is nowhere near good enough. You can read our response to Chase’s recent climate policy here.

In the months ahead, we will be continuing to partner with organizations across the country to put as much pressure as possibly can on JPMorgan Chase, the world’s largest funder of the fossil fuel industry.

Following a groundswell of grassroots pressure, Liberty Mutual adopted a policy restricting coal insurance in December 2019, but the company continues to insure and invest in oil and gas with no end in sight. Plus, they’re a major backer of the tar sands sector, providing insurance coverage for the Trans Mountain and Keystone XL pipelines.

That’s why we’re teaming up with activists in Boston, Texas, and beyond to ramp up the pressure on the insurance giant, which has a major corporate office here in Seattle. Join us to demand that Liberty Mutual stop insuring tar sands pipelines, all fossil fuels, and respect human rights. And let us know if you’re a Liberty Mutual policyholder (fun fact: Safeco is owned by Liberty Mutual!).

BlackRock
BlackRock is the world’s largest asset manager with over $7.4 trillion in assets. We are proud to support the BlackRock’s Big Problem campaign, a powerful campaign to hold BlackRock accountable for investing in the fossil fuel industry and repeatedly voting against climate resolutions. Right now, we’re putting pressure on BlackRock to vote to not renominate Lee Raymond, the former CEO of ExxonMobil and one of history’s most influential climate deniers,Â  to the board of JPMorgan Chase. You can join the action and call BlackRock here.

Stop the Money Pipeline Campaigns in the Media:

New Yorker: Money is the Oxygen on which the fire of global warming burns
Rolling Stone: How JPMorgan Chase became the Doomsday Bank
Seattle Times: The Climate Crisis Is Reshaping the World of Finance
Boston Globe: Where is Liberty Mutual in the Fight Against Climate Change?
New York Times: Want to do something about climate change? Follow the money
Bloomberg: Climate activists want Oil Man out of JPMorgan
Huffington Post: Big Banks are funding the climate crisis

For more on Stop the Money Pipeline, please check out the website and sign up for updates from the coalition: www.stopthemoneypipeline.com 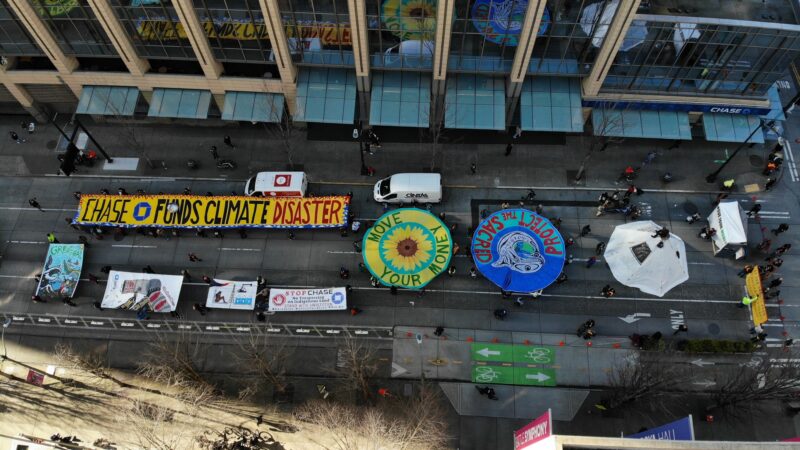