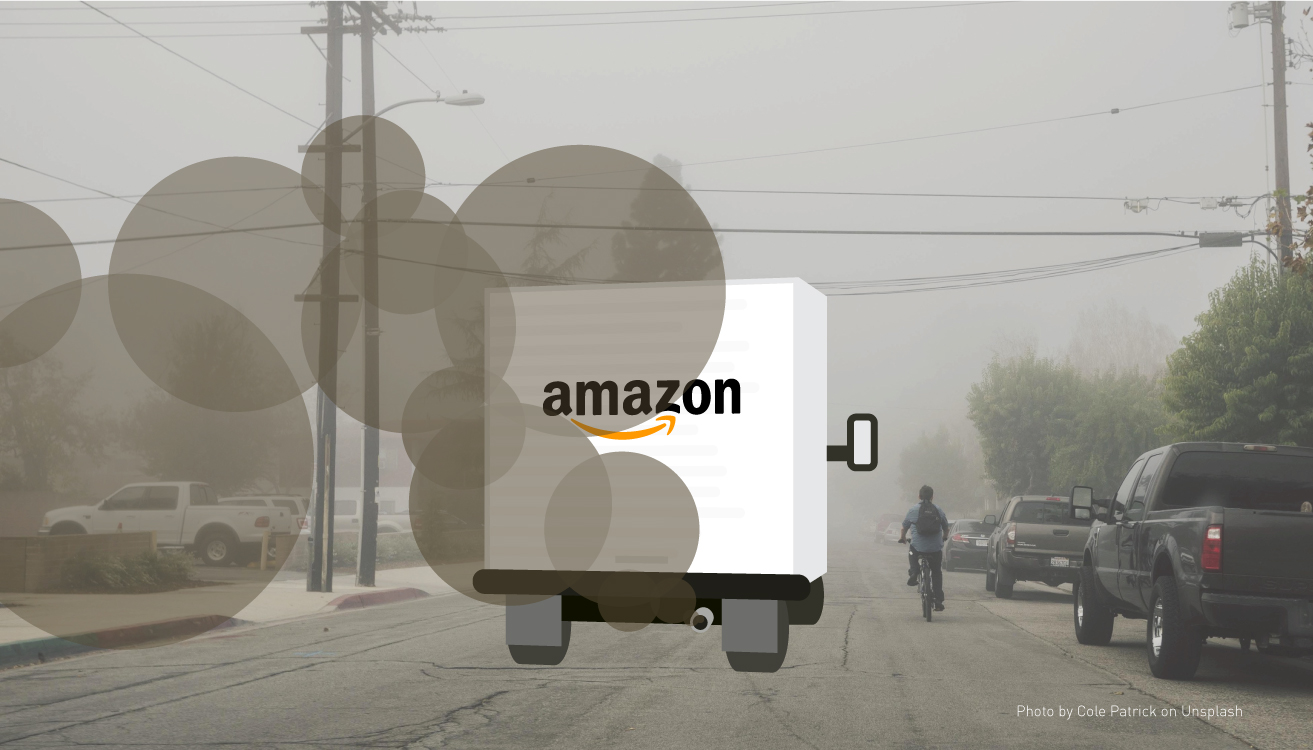 8,000 Amazon workers (and counting!) have gone public with their desire to implement a company-wide climate plan.

We deserve to know what Amazon’s climate plan is, especially considering the company spewed an estimated 19.1 million metric tons of CO2 from shipping in 2017. As the 2018 United Nations’ Intergovernmental Panel on Climate Change (IPCC) report and the National Climate Assessment make abundantly clear, combating climate disaster is going to take a massive coordinated effort—and Amazon workers are up for the challenge.

In response to employee pressure, Amazon announced Shipment Zero in February of 2019. The initiative is notable for its promise to publicly disclose (for the first time!) the company’s emissions data. It also attaches an actual date (2030) to a planned emissions reduction. But Amazon’s murky language, “50% net-zero shipments in 2030,” suggests that the plan may be a bait and switch.

Case in point: Shipment Zero seems to promise a 50% reduction in the pollution Amazon will emit in 2030—which, given Amazon’s growth, is a promise to pollute at least the same amount in 2030 as it does now.

Concerningly, “net-zero” language allows for carbon offsets, which have historically functioned as a license to continue polluting in vulnerable communities, with clean energy investments made elsewhere.

If Shipment Zero is the company’s response to its workers’ climate justice ambitions, no one is fooled. 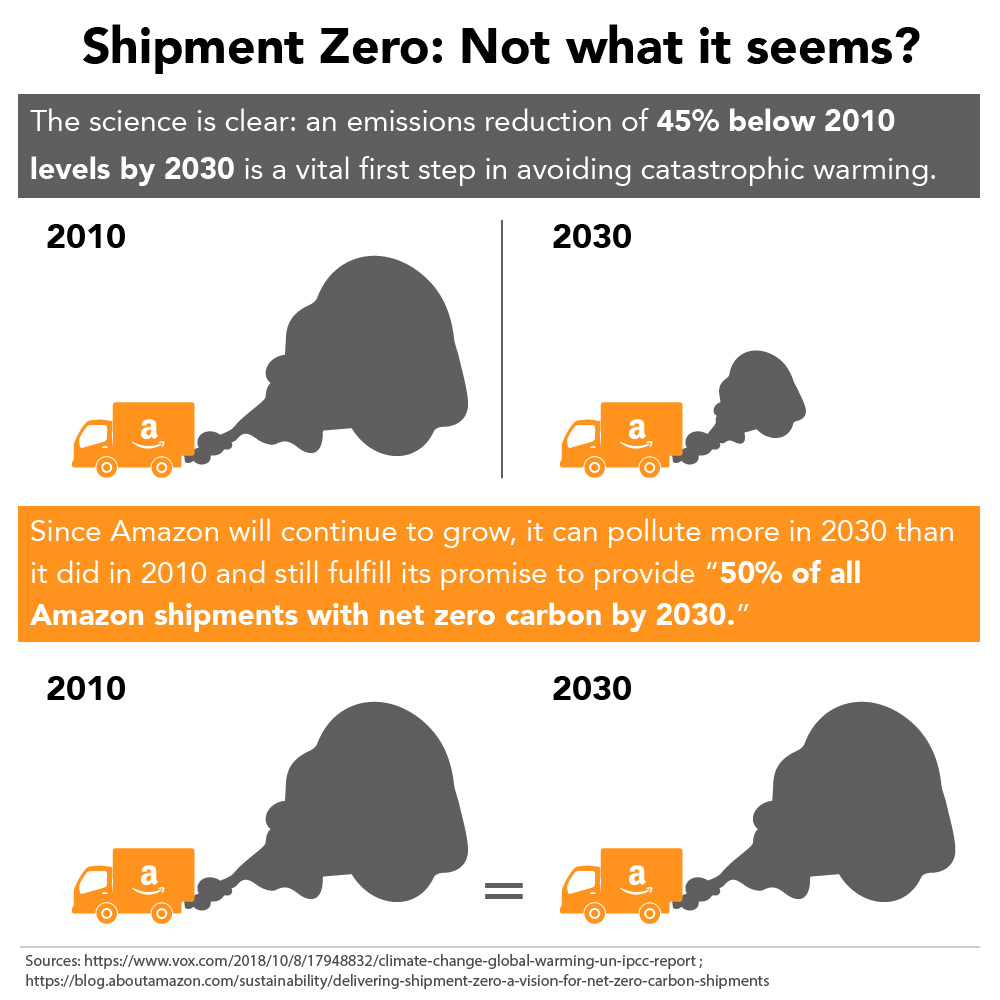 Powered by, and Powering, Dirty Energy
What Shipment Zero doesn’t begin to address is the pollution from AWS, Amazon’s cloud computing business—the largest in the world, with clients such as Netflix and Reddit. Roughly half of Amazon’s AWS data centers are in Virginia, where the electric grid uses 6x more coal than renewables (as of 2016).

Moreover, Amazon is actively courting oil companies such as BP and Shell in order to “accelerate and optimize” fossil fuel exploration with its AWS technology. As a signatory to the Paris Climate Accord, Amazon should know better. Research has suggested that the Paris Accord’s central goal—limiting warming to 2 degrees Celsius—demands a moratorium on the same fossil fuel extraction to which AWS is currently dedicated.

According to the United Nations’ IPCC report, we need to slash global emissions by 45 percent, and we need to do it in the next 12 years in order to limit warming to 1.5 degrees Celsius. The problem is urgent; speed matters. 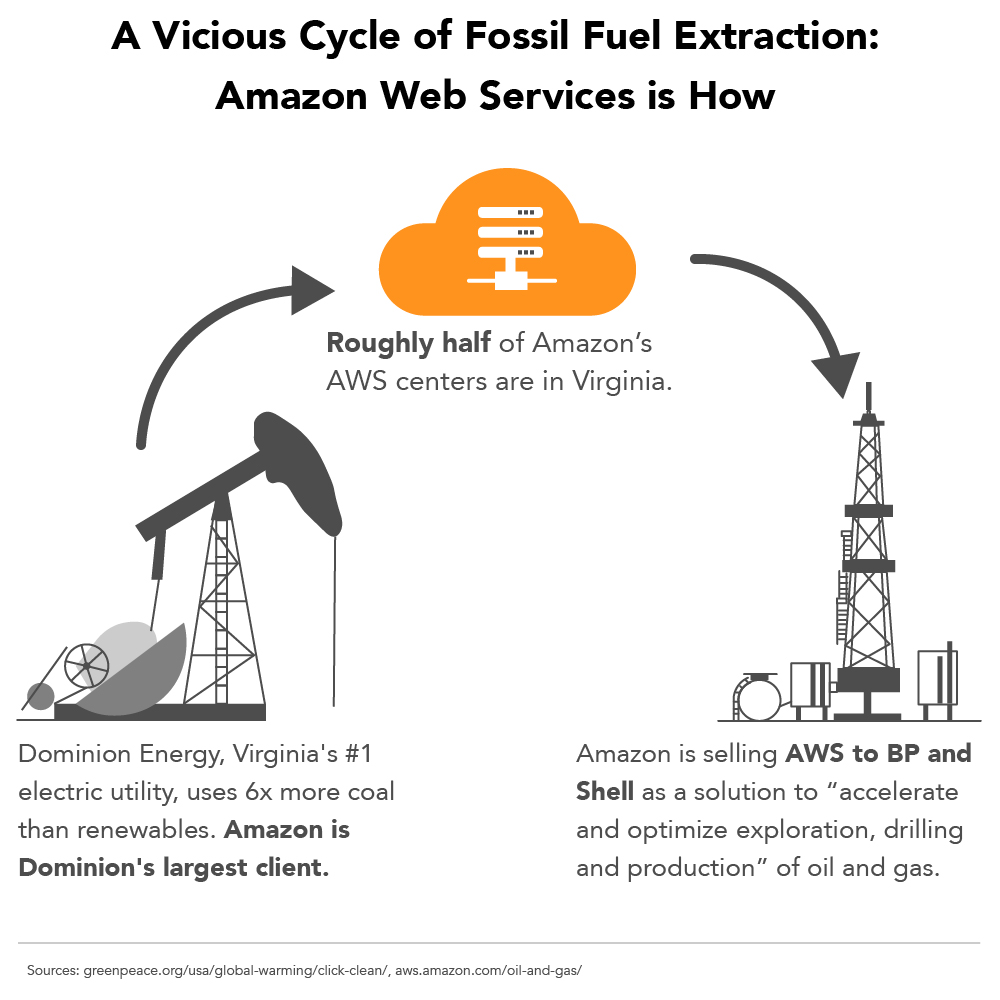 A Vacuum of Climate Leadership in the Pacific Northwest
Vulnerable communities are already bearing the brunt of climate disaster: They’re under an existential threat from our continued use of fossil fuels. Consider Seattle’s racially diverse Southside communities, where polluted air has contributed to a life expectancy that is thirteen years shorter than Seattle’s more affluent neighborhoods. Those who contribute least to the problem—low-income folks, Indigenous peoples, communities of color—are most at risk. Amazon has the power and the influence to improve the quality of air, water, and health for vulnerable Pacific Northwest communities.

Amazon is Both Culpable and Capable
For all its customer obsession, Amazon hasn’t figured out a way to deliver services in a way that doesn’t directly endanger customers’ clean air, clean water, and livable future. But it could innovate an electric vehicle delivery system—this is, after all, the same company that built an inventory management system so efficient it enables five billion two-day deliveries in a single year.

Amazon Shipping is Quick and Dirty
By our estimates*, Amazon’s 2017 shipping emissions alone had the equivalent of 4.7 coal-fired power plants operating for one year. 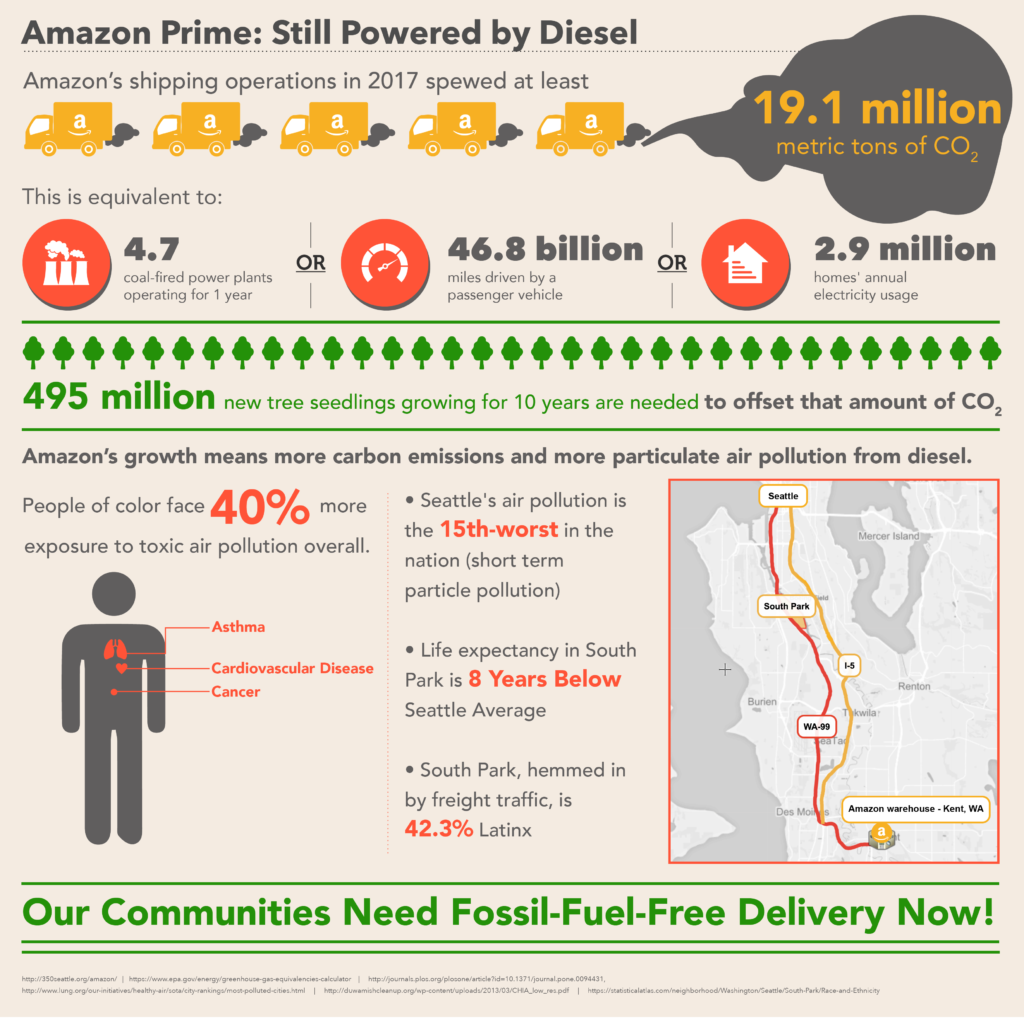 Amazon is in the Air We Breathe
Here in Seattle, we are falling behind our city’s climate goals, largely due to pollution from transportation. 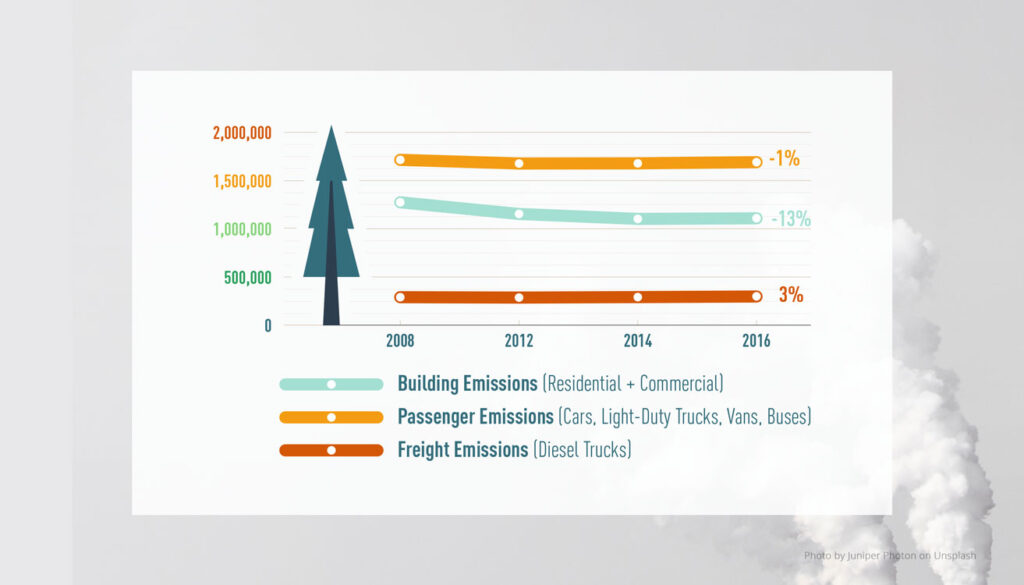 Despite Seattle’s efforts to reduce CO2 emissions, pollution from freight is on the rise.

This is a serious threat to the air we breathe, as well as to a stable climate future. The South Park neighborhood, hemmed in by freight traffic on I-5 and Highway 99, is a predominantly Latinx community just twelve miles north of Amazon’s Kent warehouse. A 2013 study of air pollutants found a “disproportionate impact of diesel exhaust” on South Park compared to downtown Seattle. Given what we know about the myriad health hazards of diesel pollution, South Park’s low average life expectancy relative to the rest of Seattle is not surprising. It also serves as a bleak reminder that people of color face around 40 percent more exposure to toxic air pollution overall.

Claim: Amazon plans to install 50 solar power systems on its fulfillment facility rooftops by 2020.
Context: 50 buildings is only 6% of the 848 buildings Amazon operates globally.

Claim: In 2017, Amazon made a 70 million dollar investment in zero-emission forklifts for its warehouses.
Context: Outside its warehouses, the company invested in a fleet of 20,000 diesel-powered Mercedes delivery vans. Meaning the only low-emissions vehicles delivering Amazon packages in the U.S. belong to “last mile” delivery drivers—contractors who’ve invested their own money in electric vehicles. 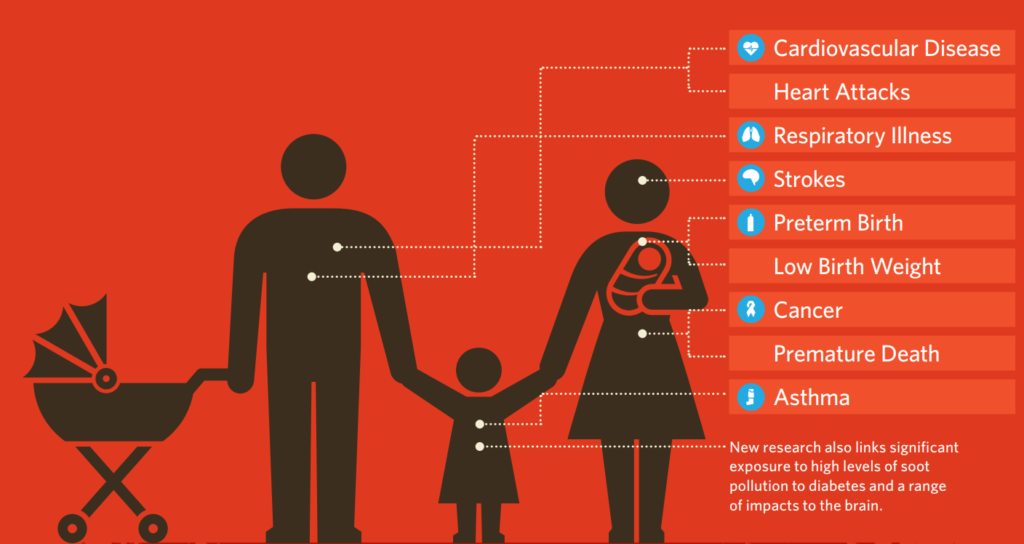 Okay, But Is Amazon Really in a Position to Effectively Tackle Climate Action?
Amazon’s operations are fragmented; its data centers are powered by utility companies in Virginia, its packages shipped by USPS, FedEx, and UPS. This segmentation has allowed Amazon to shirk responsibility for its emissions, shifting the burden of transparency and accountability onto other agencies.

Make no mistake, however: The company wields influence and decision-making power in its contracts with these carriers. It’s telling—and disconcerting—that Amazon has not used this leverage to advance a domestic diesel-to-electric vehicle transition, or a significant shift to renewables.

True, Amazon has made some noise about building its own logistics operations, but the plans aren’t climate-friendly. Across Europe, the company is contracting to launch a fleet of 130 low-pollution, electric and natural gas vans and cars. The inclusion of natural gas here is disconcerting: A study by the Environmental Defense Fund concluded that a diesel-to-natural-gas transition would result in roughly 300 years of climate damage before any benefits would kick in. Shouldn’t a forward-thinking company leapfrog dangerous natural gas and invest directly in renewables? Amazon’s recent announcement regarding the launch of a domestic fleet is similarly discouraging: Thus far, there’s been no mention of zero-emission vehicles in the U.S.

Compared to many of its corporate peers, Amazon is woefully behind. Google, which already achieved its goal of 100% renewable energy for all of its operations and data centers, successfully pressured energy providers in North Carolina to switch to renewable sources. Walmart has already placed pre-orders for Tesla’s new EV semi-trucks, and UPS is already converting half its NYC fleet to electric vehicles, showing that they are taking initiative to move beyond diesel.

Prime Customers Wanted Electric Vehicle Delivery Yesterday
We don’t have the luxury of waiting for public policymakers to rein in Amazon’s climate impact; the threat to people and ecosystems is too overwhelming, and too immediate. Nor should Jeff Bezos wait for all of Amazon’s third-party contractors, carriers, and energy providers to make the transition to clean energy of their own accord.

Now is the time for Amazon to show real leadership and use its considerable leverage in negotiating with energy suppliers and delivery contractors. Now is the time for the company to pilot electric vehicle delivery and protect the vulnerable communities living near its many warehouses and delivery routes. In implementing these changes, a Just Transition to protect workers is imperative: current Amazon employees must be given the first training and job opportunities for new clean energy operations, such as training opportunities and financial support in the transition to electric vehicles.

Contact Rebecca to join the team and help with campaign planning. 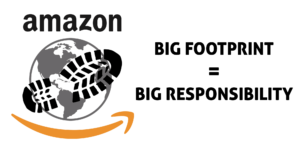 *We arrived at 19.1 million metric tons by taking the average emissions per package—averaged from the publicly released data by UPS (1) and FedEx (2)—and multiplying it by the total number of Amazon packages delivered in 2017. The number of 2017 Amazon deliveries is an estimate from the company’s released datapoint of Prime members ordering 5 billion items (3) worldwide in 2017 with the addition of another 30% (4) for non-prime-membership customers.
(1) https://www.sustainability.ups.com/sustainability-reporting/
(2) http://csr.fedex.com/downloads.php
(3) https://www.theverge.com/2018/1/2/16841786/amazon-prime-2017-users-ship-five-billion
(4) https://marketingland.com/report-prime-members-now-represent-63-percent-amazons-us-customers-226573

Shipment Zero: Not what it seems?

The science is clear: an emissions reduction of 45% below 2010 levels by 2030 is a vital first step in avoiding catastrophic warming.

Since Amazon will continue to grow, it can pollute more in 2030 than it did in 2010 and still fulfill its promise to provide “50% of all Amazon shipments with net zero carbon by 2030.” [graphic of an Amazon Prime delivery truck emitting a large cloud of pollution in 2010, with an identically large emission in 2030]

A Vicious Cycle of Fossil Fuel Extraction: Amazon Web Services is How

Roughly half of Amazon’s AWS centers are in Virginia.

Amazon is selling AWS to BP and Shell as a solution to “accelerate and optimize exploration, drilling and production” of oil and gas. [graphic of pumpjack being used to power AWS data centers which in turn power oil derrick]

Amazon’s shipping operations in 2017 spewed at least 19.1 million metric tons of CO2.
This is equivalent to:
4.7 coal-fired power plants operating for 1 year.
or
46.8 billion miles driven by a passenger vehicle.
or
2.9 million homes’ annual electricity usage.

495 million new tree seedlings growing for 10 years are needed to offset that amount of CO2.

Seattle’s air pollution is the 15th-worst in the nation (short term particle pollution).
Life expectancy in South Park is 8 Years Below Seattle Average.
South Park, hemmed in by freight traffic, is 42.3% Latinx.[map of Seattle showing South Park adjacent to 2 highways and on the route between Seattle and Amazon warehouse in Kent, WA]