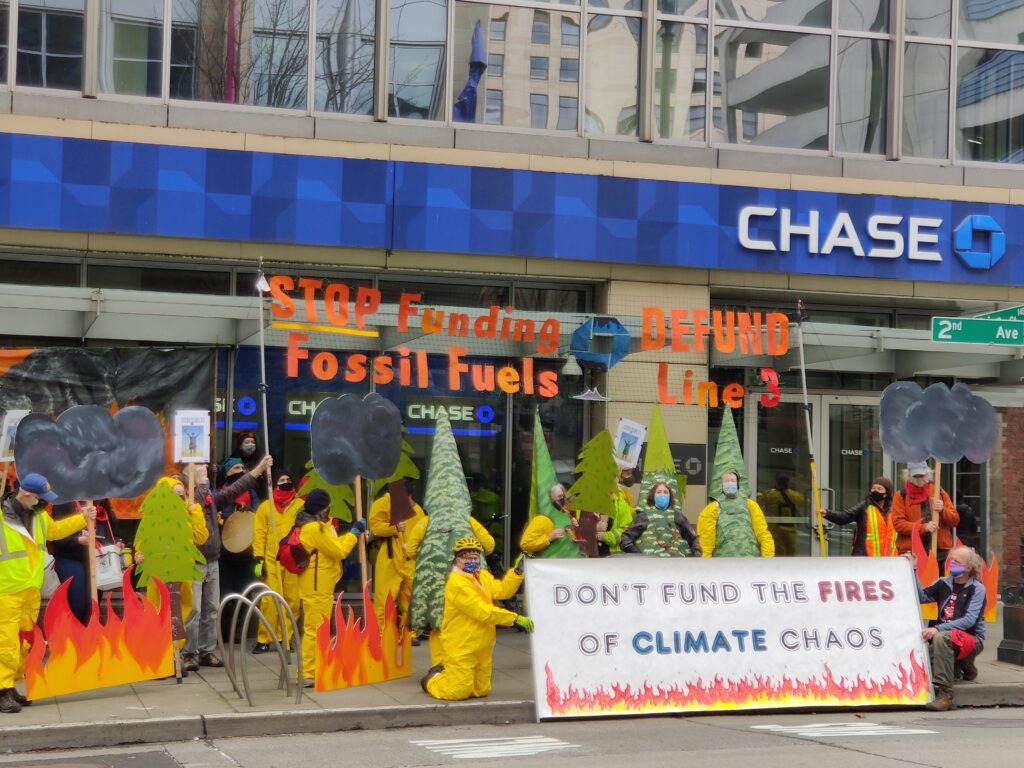 350 Seattle and Mazaska Talks are both active members of the Stop the Money Pipeline coalition. Yesterday morning and early afternoon, dozens of people visited five bank branches. Maintaining Covid-safe protocols such as mask-wearing and social distancing, they inflated a 50′ inflatable pipeline and staged a mock oil spill on the road outside of one downtown bank branch. At another, they hung a huge #DefundLine3 banner outside the doors of a JPMorgan Chase branch. Outside of Chase’s regional HW, they staged wildfire-themed street theatre.

In an echo of the extended protests against the Dakota Access Pipeline at Standing Rock, Canadian company Enbridge is facing staunch opposition from tribal nations and climate activists as it attempts to build a 1,000 mile-long tar sands pipeline from Alberta to the Wisconsin shores of Lake Superior.

Over the past two months alone, more than 120 people have been arrested blockading construction of Line 3, a tar sands pipeline in Northern Minnesota. Meanwhile, The Red Lake Nation, the White Earth Nation, and the Mille Lacs Band of Ojibwe are all suing in court to stop the pipeline.

The opposition is understandable; the pipeline would threaten the waters, land, and air of tribal nations who have not consented to the project. And according to Enbridge’s own environmental impact statement, Line 3 would release 193 million tons of greenhouse gas into the atmosphere every single year. That’s as much as the twelve largest power plants in the United States combined.

In response, the Stop the Money Pipeline—a coalition of more than 150 climate, environmental and human rights groups, including some of the country’s largest environmental organizations, such as 350.org, Sierra Club, Friends of the Earth and the Indigenous Environmental Network—has launched Defund Line 3, a major campaign calling on banks to stop funding the corporation behind the Line 3 pipeline.   “

Line 3 is completely incompatible with the goals of the Paris Agreement,” said 350 Seattle Campaigns co-Director and Stop the Money Pipeline co-ordinator Alec Connon. “But what’s more, it’s a white supremacist project, steamrolling the rights of three tribal nations that are suing to stop it in court as we speak.”

On March 31st, 18 major banks ― including JPMorgan Chase, Bank of America, TD Bank, and CitiBank ― have a $2.2 billion loan to Enbridge, the corporation behind Line 3, that is due for renewal. The Stop the Money Pipeline coalition is doing everything in its power to make sure those banks walk away from Enbridge. “Banks have a simple choice,” added Connon. “Either they walk away from Enbridge on March 31st, or they renew that loan and choose to fund the colonial, racist, carbon bomb that is Line 3.”

Since the campaign launched on Feb 9th, more than 230,000 emails have been sent and 500 phone calls have been made to the CEOs of the banks on the loan, demanding that they drop Enbridge. More than 600 people joined the campaign launch event on Tuesday night, raising more than $12,000 for the Indigenous-led frontline resistance camp, Giniw Collective, which trains people to take direct action to stop construction. 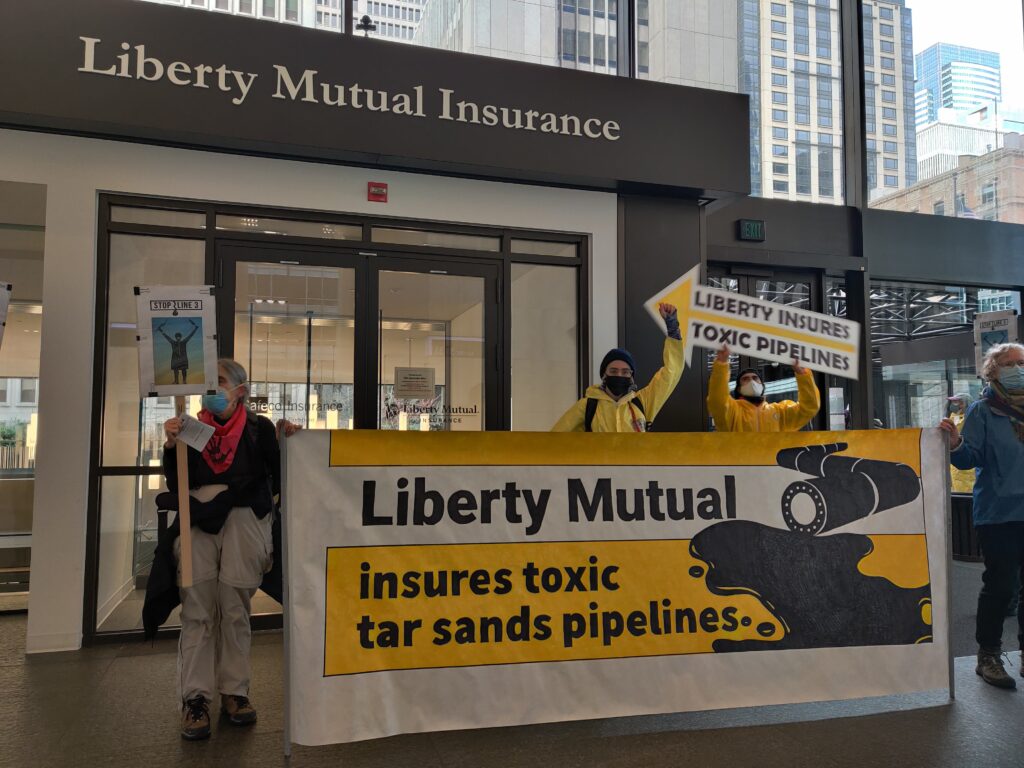