First, let me say the demonization of 350 as somehow a capitalist tool is so far from my experience of what 350 is as to make that characterization ridiculous, even grotesque.  I serve as President of the Board of 350 Seattle, the independent, local affiliate of 350.org, and have been active in the group now for nearly seven years.  In that time, we have been a keystone of the region’s direct action efforts against fossil fuel infrastructure expansion, part of the Northwest’s thin green line strategically sited between the vast fossil reserves east of the Rockies and the growing markets of Asia. The thin green line has stopped literally dozens of coal, oil and gas export facilities.  We played a key role in the kayaktavist uprising that drove Shell’s Arctic drilling fleet out of Seattle, and contributed to the company’s pulling out of Arctic drilling.  We organized the Seattle end of the support network for the Standing Rock camps in their pipeline fight, and support the Northwest tribes in their fights against fossil fuel infrastructure on their lands. 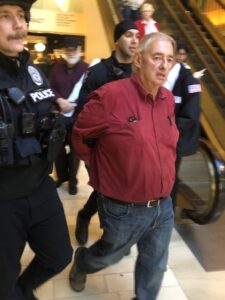 We center national work against JP Morgan & Chase for becoming the largest bank investor in tar sands and other fossil fuels, a campaign that includes nonviolent direct action.  Our group supported creation of Amazon Employees for Climate Justice (AECJ), which is pushing Amazon on its carbon pollution, and lining up behind warehouse workers in their struggles for safe working conditions.  An Amazon vice president, Tim Bray, one of the company’s only 20 distinguished software engineers, recently resigned rather than signing off on the firing of two of AECJ’s internal organizers. We are lined up with our socialist Seattle city councilmember, Kshama Sawant, in a campaign to tax Amazon and other big businesses, as we were on an employee head tax to fund homeless and affordable housing services, which Bezos and company unfortunately turned back.

And, oh yeah, we are going after growth assumptions.  350 Seattle is challenging Port of Seattle plans for cruise ship expansion and aviation growth.

Capitalist tool?  My ass!  Our folks are actually largely on the other side of things, highly skeptical of business as usual, and seeking deep transformation to ensure climate justice.  This is the 350 I know.

In the past several years, I have seen a new climate justice movement grow up around me. The youth of Sunrise Movement.  Greta and Fridays for the Future, etc. For an old guy who has been fighting this fight for too long, this is one of the most heartening developments. Unlike the old movement, it actually is diverse, a lot of young people of color. Climate justice is about far more than technology, but a profound moral-social shift that provides justice for workers, for people of color, for disadvantaged groups of all sorts, as we make a transition to a more sustainable world.

The new movement has crystallized the Green New Deal, the first idea big enough and with enough traction to bring down carbon emissions in time to avert the worst of climate impacts.  The most authoritative scientific body, the IPCC, says we must cut emissions in half in the next 10 years to hold temperature increases under 1.5 degrees C.  We face terrible consequences if we don’t, including epidemics and global food shortages that make the current Covid crisis look tame. The implications for the natural world, for corals, for forests, for biodiversity, are immense.  We are already seeing mass diebacks in corals such as the Great Barrier Reef, and indications Amazonia is turning from a carbon sink into a carbon source.  Meanwhile, the less focused problem of ocean acidification threatens mass dieback of marine life. We must ask how we cut emissions in half in 10 years, a towering challenge, politically, economically, and socially.  What is the critical path?

I am deeply studied in climate science and solutions, having devoted most of my work and attention to the climate crisis since 1997.  I can tell you the only way to bring down carbon pollution fast enough is to shift from fossil fuels.  It is not all we need to do, but if we don’t, we don’t have a chance. There are two ways to reduce fossil fuels – Use less, and generate what we do use from renewable sources.  It demonstrates a lack of awareness about what is really going on in movements and advocacy to say we are talking about simply switching fuels.  The Green New Deal in fact has a huge emphasis on energy efficiency, mass building retrofits for example.  It advocates not only electric cars, but electrified mass transit, and a much more comprehensive system, as well as improved bike infrastructure and a move to land use patterns that involve less transportation overall.   Electrifying vehicles and buildings alone saves tremendous amounts of energy, because stuff like heat pumps and electrified drive trains are inherently far more efficient than fossil-fueled alternatives.

The Seattle Green New Deal developed by 350 Seattle with community allies places a large emphasis on affordable housing near electrified transit, because low-to-moderate income people are being driven out of this expensive city to places they must use cars.  We merge social justice with better technologies and reduced energy use.  All are necessary. This is the Green New Deal model.

Meanwhile, the energy we use has to increasingly come from wind and solar.   Lifecycle and energy return on investment studies consistently document that the amount of fossil fuels used to make wind and solar does not cancel out the carbon emissions reductions from using them.  Scientist Dana Nuccitelli notes in Yale 360 that “a 2017 study in Nature found that when accounting for manufacturing and construction, the lifetime carbon footprints of solar, wind, and nuclear power are about one-twentieth of those of coal and natural gas, even when the latter include expensive carbon capture and storage technology. The energy produced during the operation of a solar panel and wind turbine is 26 and 44 times greater than the energy needed to build and install them, respectively. There are many life-cycle assessment studies arriving at similar conclusions.”

Of course, there are impacts, but the resource extraction impacts of making renewables are so outweighed by the impacts of mining and drilling coal, oil and natural gas it is absurd to put them in the same ballpark.  Check out the ravaged landscapes of Alberta or West Virginia.

So, the logic is that (a) since we must reduce emissions by half this decade, and (b) wind, solar and electrified transportation are essential elements of the critical path to this reduction, then (c) anything that undermines progress in this direction is undermining our only real hope of averting climate catastrophe, with its disastrous impacts on the human and natural worlds. “Planet of the Humans” does exactly this, so it is feeding some of our worst enemies.  Climate denier thug outfits like Heartland Institute and Competitive Enterprise Institute love it. Nuclear advocates love it.

Of course, there are vast issues surrounding humanity’s overall relation with the Earth.  Even if we were not heating it up, we are eroding the basics of life – soils, waters, forests, fisheries, etc.  We know this.  To imply people in the climate justice movement do not know this is insulting.  We simply see the greatest immediate threat to humanity and the natural world is climate disruption, the critical path is fossil fuel reduction, and the means are energy efficiency and renewables.  So a movie that puts out lies and disinformation on renewables, feeding the fossil fuel industry enemies, is damaging in the extreme, whatever its other merits.

It really has only been in the last several years that solar, wind and battery options have become cost competitive with fossil-fueled technologies.  That is the result of public policies forwarded by climate and energy advocates, such as feed-in tariffs in Germany, renewable energy standards in the US, and public investments in research, development and deployment.  These have produced learning curves and economies of scale that position renewable and vehicle electrification technologies to massively replace fossil fuels in the 2020s. We have not stopped the growth of fossil fuels yet, but we have slowed it from where it might have been.  The 2020s are the time we must turn the ship around.  And because of the good work of movements and groups such as 350, we are prepared to do so.

I see “Planet of the Humans” as undermining our main chance, really our only chance, to turn the ship around in time.  It does this by undermining public support for renewables, which, along with reductions in energy use through efficiency investments, are vitally necessary to reach that IPCC goal of 50% carbon pollution reductions by 2030. Yes, we have longer-term issues in terms of our overall relation with the planet.  But this is critical path, and if we don’t get this, we won’t have much of a planet left.  This is why I have taken the stand I have against “Planet of the Humans.”