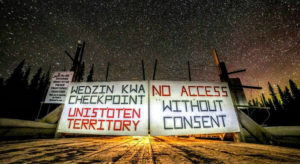 For nearly ten years, the Unist’ot’en Camp has been a leader in indigenous anti-colonial resistance and the movement to keep fossil fuels in the ground. Now, they are asking for help.

Located in Northern (so-called) British Columbia in the unceded territories of the Wet’suwet’en nation, a cabin, bunkhouse, and three-story healing center sit in the direct path of TransCanada’s Coastal Gaslink Pipeline, Chevron’s Pacific Trails Pipeline, and the former route of the now dead Northern Gateway tar sands pipeline. The pipelines would link BC’s ports (and thus Asian markets) to its fracking industry—and later, potentially, to Alberta’s tar sands; the gas pipeline contracts stipulate that after 5 years they can carry tar sands  to brand new export terminals.

The Unis’to’ten camp sits on the shore of the Wedzin Kwa, a salmon-bearing glacial river that provides clean drinking water and is surrounded by forests with plentiful wildlife. The only way to access the Unist’ot’en Clan’s mountainous territory, and a significant portion of the proposed pipeline route, is by crossing a one-lane bridge. At the bridge the Unist’ot’en have installed a gate and a checkpoint, where they enforce their right to Free, Prior and Informed Consent, and all visitors must answer questions about the nature of their visit to be granted access to their territory.

For almost ten years, oil and gas workers who have attempted to cross the bridge have been turned away, and work crews who have landed in the territory via helicopter have been told to leave. In 2014, during the height of the Idle No More movement, video of the Unist’to’en evicting industry helicopters from their territory went viral and was an inspiration to land defenders around the world. For me, it was an inspiration to visit the camp and find out how I could lend support.

While opposition to pipelines was the impetus for the camp and an attraction for many visitors, the larger vision for the Unist’ot’en has been for the camp to play a central role in healing their community from the impact of generations of colonialism, and to assert their sovereignty over the little remaining territory where they can still hunt and gather medicine and foods. For the Unist’ot’en, connection to the land and culture is central to the process of healing, and the construction of pipelines threatens to take that away from them.

Like most land in British Columbia, Unist’ot’en territory is unceded, meaning they never signed any treaties with the Canadian government, never sold their land, nor lost it in war. The Unist’ot’en are unique in that they and the other clans of the Wet’suwet’en nation won the first major land claims case in the Supreme Court of Canada: Delgamuux vs The Queen. In that case, the courts acknowledged that the Hereditary Chiefs of the Wet’suwet’en and Gixtsan nations held title over all of their traditional territories encompassing 58,000 square kilometers.

All the Hereditary chiefs of the Wets’suwet’en nation have stood in firm opposition to all proposed pipelines, and have been exercising their own pre-colonial laws to prevent construction. Freda Huson, spokesperson for the camp, has been clear that the camp is not a protest or demonstration, it is an occupation of their traditional homelands. Industry and the pipeline-supporting Canadian government have been trying to circumvent the authority of the Wet’suwet’en hereditary chiefs by signing agreements with band councils, but the Canadian government’s own legal precedent compels it to gain the consent of pre-colonial indigenous governing bodies.

Over the years, the outpouring of solidarity for the camp has been impressive. Thousands of visitors have spent time at the camp, holding the frontline and helping to fundraise and build multiple significant structures. When pressure from industry and government mounted on the camp in 2015 and police threatened to violently evict its peaceful residents, grassroots groups mobilized to the frontline and organized solidarity actions at banks, industry offices, and embassies including the Canadian Embassy in Seattle. In that moment, the international pressure was enough to give the state pause, and they backed off from a raid.

Now, after a couple years of quiet, the fossil fuel industry has won  final investment in its LNG Canada export terminal, and is launching another offensive against the camp. Last week, TransCanada filed for both an injunction and a SLAPP suit against leaders of the camp. They have a court hearing scheduled for Monday, December 10th and could have an injunction granted as early as the next day that could allow police to evict the camp.

It appears the fossil fuel industry’s strategy is to try to push through in the dead of winter while people and media are distracted with the holidays, and leaders of the camp are caring for ailing relatives ― one of the two camp leaders, Hereditary Chief Smogelgem, is currently caring for his sick mother in palliative care. We cannot let them get away with this. The camp is calling for people to show solidarity. You can do that by…

The Unist’ot’en Camp has been a key leader in the movement to keep fossil fuels in the ground, and a critical inspiration for indigenous anti-colonial resistance and healing. For nearly ten years, they have been living on the frontline and preventing one of the largest expansions of the fossil fuel industry in North America, fighting a fight that has received little attention or resistance from NGOs since the defeat of Enbridge’s Northern Gateway pipeline.

The time for solidarity is now. As a young person with my heart in the fight for climate justice I call on all of my peers and comrades to mobilize in solidarity with the Unist’ot’en camp in their time of need in whatever way you can.

Andrew, who just finished 7 months working as an organizer for 1631, has spent time at camp every year since 2014 and has been in contact with camp leaders since TransCanada’s recent move to have the camp evicted.