What an amazing eight days! Last Monday, activists from 350 Seattle and 350 Tacoma climbed a crane to stop construction of the Tacoma LNG facility. On Thursday, activists used tripods to block all three gates to the site. That same day, a Tacoma jury, finding ambiguity in whether the LNG facility is on Puyallup or City of Tacoma-owned land, acquitted two women who locked down to construction equipment.

Then Monday was the biggest day of them all. Watch the wrap-up video. 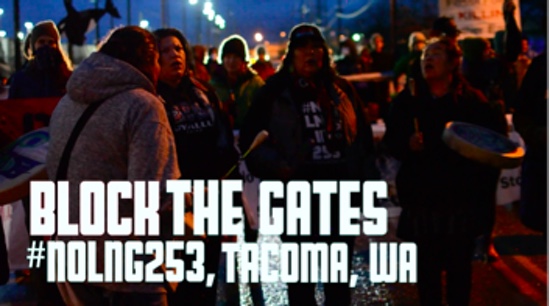 If Puget Sound Energy hadn’t already gotten the message, they have now: they have a gas problem.

We all have a gas problem: gas production releases huge amounts of methane, a greenhouse gas that, over a 20-year period, causes 86 times more global warming than carbon dioxide.

But this project is even worse than that: Puget Sound Energy is not only destroying our climate, it is also perpetuating a long and brutal history of colonialism.

We will oppose this project with everything we have, and stand with the Puyallup.

Can you join us? You can start by adding your voice to 44,000 others calling for a halt to this project.

Starting in January, the Puget Sound Clean Air Agency will begin a 60-day comment period followed by a public hearing. This will be our last major chance to stop this project through the regulatory process. We’ll need you then, so stay tuned.